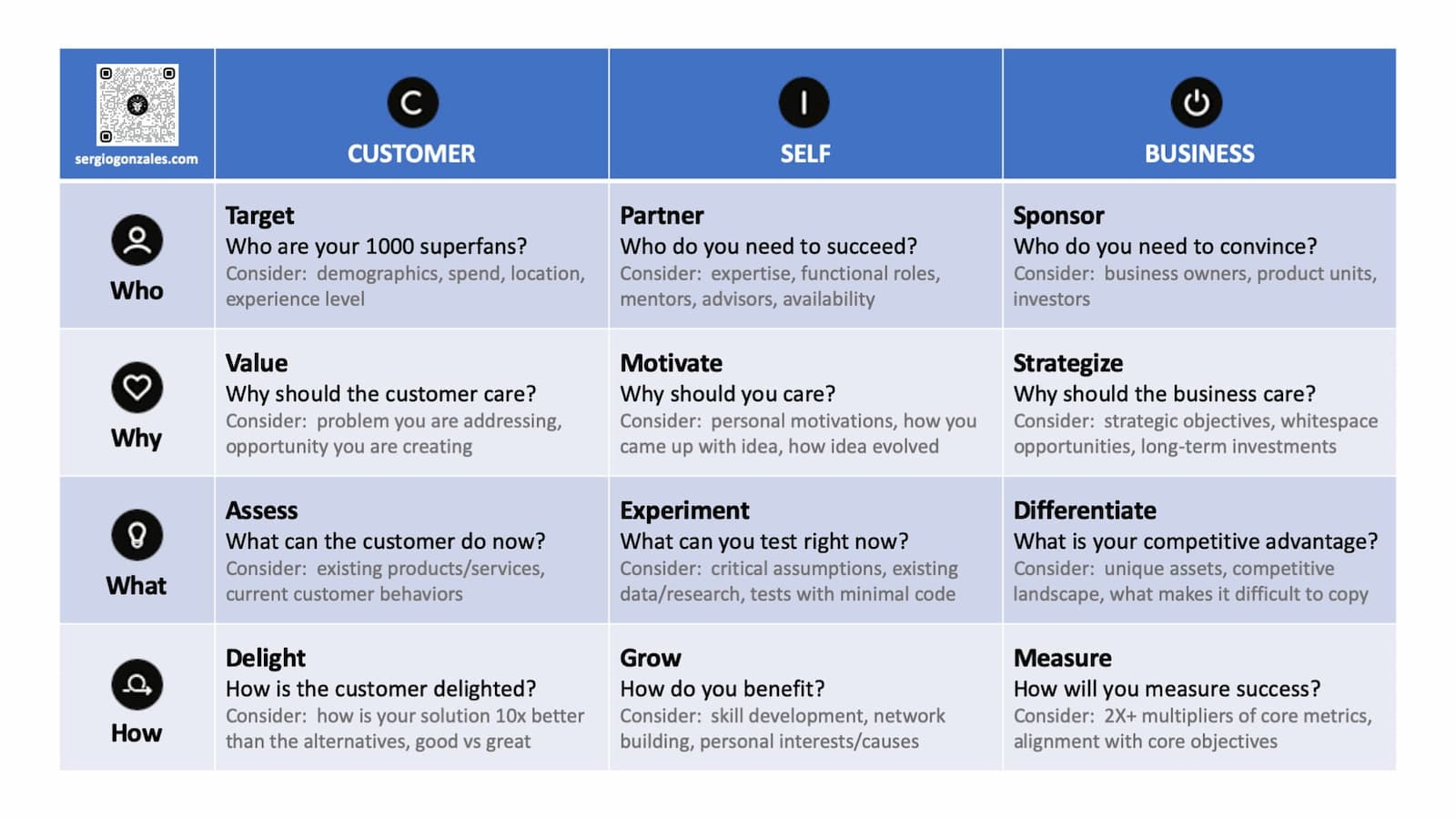 Taking Your Idea from Good to Great

Are you able to articulate how your work drives value for the customer, yourself, and your business?

Ah, the myth of the flash of genius or the eureka moment. Rarely does a brilliant idea spring forth fully-formed and ready for that billion-dollar valuation. There are a great many, many steps that stand between your taurine-addled, TED-marathon-inspired brainchild and the delightful product or service that will win you legions of dedicated customers.

Contrary to what your Nana tells you, your idea ain't that special. Not yet, it isn't. What? You thought you were the only person on a planet of 7 billion people to have ever come up with that idea? I guarantee you, you're not. But...you can be the one in a billion who has the conviction, passion, and tenacity to do something special with that idea. To take the initial spark of inspiration and turn it into something truly great.

So how do you take your idea from it-seemed-like-genius-at-3am to life-would-cease-to-exist-without-it? By being disciplined about how you develop that idea. Here's a Good-to-Great Matrix I've developed as a thinking exercise when I'm considering an idea. It's not meant to be a checklist nor is it exhaustive by any means. It's simply a place from which my exploration can take me down many paths. Food for thought. A tool to begin a conversation with my peers, potential supporters, experts, and investors. It's something I return to frequently through iterations and pivots.

I won't go into each item individually but I will highlight three that I've found most helpful, especially as I've coached other aspiring innovators through this exercise. For this, I'll lean on a few of the Delphic Maxims.

Know Your Opportunity (Customer)
Who are your 1000 superfans? If you can't delight 1000 people there is no way you're going to be able to delight millions. Now, I'm not saying that your entire enterprise can sustain itself on just a thousand customers as there are very few businesses that could. But what I am saying is before you can grow your legions of fans, you've got to really understand who are the first thousand superfans. Rabid about telling others about your work. Can't imagine life if you went away. Those are your thousand superfans. They will help you stay laser-focused as you go through your first important iterations. They will help you manage scope.

Whenever I am considering a concept, I construct an archetype in my mind of who I imagine the ideal customer might be. For example: he is Jack, 36, husband and father to a 4-year old daughter, and lives in Topeka, Kansas; Jack makes $44K a year and spends less than $2400 a year online. So now, as I consider Jack's needs and how I might address them I can defer those features that wouldn't delight Jack. That's not to say I won't come back to revisit them for Jill, 28, single, makes $82K a year, and spends more than $4700 a year online. But for now, it's all about Jack. Jack will be my superfan. Jack will convince and bring on board Tom, Dick, and Harry.

Know Thyself (Experiment)
What could you test right now? I'm a programmer by training. It's in my nature to tinker. To hack. To get into the code and experiment. There is goodness in this. But it could also lead me too far down a path before I've really considered my critical assumptions. What are the one or two things that if they prove to be false my entire concept falls apart? Great, now how do I construct an experiment to validate them without touching code? If developing the idea would cost me $100K in dev hours, how do I test it for $1K? Before building a mobile app, how could I test it using existing tools and user behaviors? In the hundreds of teams I've coached through this exercise I have yet to encounter a critical assumption we couldn't test without minimal dev effort.

Know the Judge (Sponsors)
Who do you need to convince? One might think that this is a no-brainer but I can't tell you how often I have asked this question only to be met with blank stares and deafening silence. Not all investors are created equally. The temptation to go after the big firms with the deep pockets is tremendous. Bigger is not always better. You'll need to consider who are the people who will be most passionate about your idea, who will be the most invested, who will have the best resources to bring to bear on your concept. That is who you need to convince.

This is especially true if you are trying to promote an idea within a large organization. You might think that going to the CEO, CTO, and CPO is a guaranteed path to success. It's not. Any more than going to the Vice President of regional sales in EMEA when your concept lands in APAC. If your concept involves automobiles then speaking to the Director of Data Infrastructure probably isn't going to have as great a return for you as finding time with the Director of Motors. Know who you have to convince.

An Exercise
I have used this matrix in many different parts of my life, not just for my work in innovation. I had a colleague who I was coaching on the Good-to-Great Matrix a while ago who was having a bit of difficulty grasping it so I asked her to walk me through some project she had that was not work-related. She was trying to get an intramural soccer league started for her daughter. So who were her 1000 superfans? Girls? Not good enough. Girls between the ages 6 and 11 who lived in her school district who recently saw their athletic budgets cut. Those are superfans.

Who did she need to convince? Local parks and rec in order to use their facilities. Other Moms who wanted the same for their daughters. What could you test right now? Before you get into all of that city paperwork, liability insurance, and funding, do you have enough interested parents and players? If that isn't true you cannot have an intramural soccer league. Put those phone trees to work. Speak to the other parents. Ask how many would be ready to put a deposit down for league fees. If you don't think that this pre-sale approach is practical ask Tough Mudder, who pre-sold 4500 tickets and made a cool $500K before digging a single obstacle; they're worth over $250M today. By asking her just three of the questions from the Good-to-Great Matrix she was well on her way. And, yes, they were able to start their intramural league that still flourishes today.

Final Thoughts
The Good-to-Great Matrix is not a formula for success. It's simply a tool to help you with a rigorous, disciplined approach to developing an idea. It helps you begin to think of all those devilish little details. From here, the really hard work begins.

If you made it all the way to the end of this article, here's a bonus for you, an editable Google Doc version of the Good-to-Great Matrix that you can copy to your own drive. Each cell has a description in the notes that appear when you click in the cell. You're welcome, and happy creating!